Therefore, consider overriding automatic revocation of beneficiary designations under insurance policies. After divorce, you may want the insured policy holder to redesignate a spouse as beneficiary. For example, you may decide you’d like to secure alimony or child support with life insurance. To achieve that goal, keeping your ex-spouse as beneficiary may make sense.

Florida Statutes Section 732.703 of the Florida Probate Code revokes on divorce designations of an ex-spouse under financial instruments such as life insurance policies, individual retirement accounts (IRAs), and pay on death accounts. For further discussion, read how the statute applies and exceptions here.

As your collaborative divorce team considers automatic revocation of insurance policy designations on divorce, it should also consider related statutes that affect other instruments.

First, section 732.507, Florida Statutes, also in the Florida Probate Code, applies to will provisions that affect an ex-spouse.

Second, section 736.1105, Florida Statutes, in the Florida Trust Code, applies to designations of an ex-spouse under revocable trusts. The Florida Legislature amended both sections effective July 1, 2021. See Laws of Florida 2021-183.

Here is a chart of state automatic revocation statutes.

Florida is one of 27 states with an automatic revocation on divorce statute substantially similar to the Uniform Probate Code’s Section 2-804. To read Section 2-804, please click here.

But are these automatic revocation statutes constitutional?  After considering the question in Sveen v. Melin, 138 S. Ct. 1815 (June 11, 2018), the US Supreme Court answered “yes.”

On remand, the Eighth Circuit Court of Appeals upheld awarding the policy proceeds to Mr. Sveen’s children, rather than to his ex-wife. See Metropolitan Life Ins. Co. v. Melin, 899 F. 3d 953 (8th Cir. 2018). See also Blalock v. Sutphin, 275 So. 3d 519 (Ala. 2018) (affirming trial court’s order that decedent’s daughter was the sole beneficiary of New York Life whole life insurance policy, because decedent’s designation of his ex-wife, before they divorced, as beneficiary was automatically revoked under Alabama’s revocation on divorce statute).

UPC Rewrite in 1990: Expands Automatic Revocation to Will Substitutes

The 1969 Uniform Probate Code underwent a rewrite in 1990. Before 1990, Section 2-508 revoked devises by will to a former spouse. In 1990, the Joint Editorial Board for the Uniform Probate Code (now the Joint Editorial Board for Uniform Trust and Estate Acts) and a special Drafting Committee to Revise Article II substantially revised Section 2-804.

The revisers expanded the provision to “will substitutes,” such as revocable trusts, life insurance designations, retirement plan beneficiary designations, transfer-on-death accounts, and other revocable dispositions made before the divorce. See General Comment, Part 8, Uniform Probate Code (1969) (Last Amended or Revised in 2019), National Conference of Commissioners on Uniform State Laws.

The dispute was over $250,000 life insurance proceeds. A former husband’s brother and estate won the appeal and a reversal of summary judgment for the decedent’s ex-wife. The trial court incorrectly found South Carolina’s statute didn’t apply to revoke a beneficiary designation made in the ex-wife’s favor before a divorce. Both the designation and divorce occurred before the statute took effect. Reversing, the South Carolina Court of Appeals held the statute had retroactive effect.

Section 62-2-507(c) of the South Carolina Code, like section 732.703, Florida Statutes, codifies the presumption an insured doesn’t intend for his or her ex-spouse to remain a beneficiary of insurance policies after divorce. Its effective date was 11 years after the divorce, but before the decedent died.

The decedent’s brother and estate sued the ex-wife and Transamerica Life Insurance Company. Plaintiffs asserted, under South Carolina’s automatic revocation statute, the divorce revoked the designation of the ex-wife as beneficiary. Their theory was the revocation upon divorce statute was in effect at the triggering event: the insured’s death. The ex-wife counterclaimed for tortious interference with contract. She brought a crossclaim against the insurance company for breach of contract and unreasonable and bad faith refusal to pay her the policy benefits.

Transamerica sought interpleader to pay the proceeds into the court registry.

The Trial Court Rules for the Ex-Wife

The trial court denied the brother and estate’s motion for summary judgment, finding the South Carolina statute didn’t apply retroactively. This was so, the court held, despite the US Supreme Court’s 2018 ruling in Sveen v. Melin, which found Minnesota’s revocation upon divorce statute didn’t violate the Contracts Clause of the US Constitution. Attempting to distinguish Sveen, the trial court held South Carolina’s statute changed and impaired the decedent’s contractual relationship with the insurance company.

The Court drew on the rationale for revocation on divorce statutes (like Florida’s and South Carolina’s), which Justice Breyer articulated in 2001:

“As many jurisdictions have concluded, divorced workers more often prefer that a child, rather than a divorced spouse, receive those assets. Of course, an employee can secure this result by changing a beneficiary form; but doing so requires awareness, understanding, and time.”

“That assumption is embodied in the Uniform Probate Code; it is consistent with human experience; and those with expertise in the matter have concluded that it `more often’ serves the cause of ‘[j]ustice.’ ” Id. (alteration by dissent) (quoting John H. Langbein, The Nonprobate Revolution and the Future of the Law of Succession, 97 Harv. L. Rev. 1108, 1135 (1984)).

Support for the SC Court’s Decision

Further, the Meier v. Burnsed Court reasoned in Sveen, the US Supreme Court found the Minnesota statute and model code it followed applied an understanding other jurisdictions and law review authors have broadly discussed. This understanding is, after divorce, most spouses don’t want to enrich their ex-spouse. That’s true for both bequests under wills and benefits under life insurance policies.

The South Carolina Court of Appeals surveyed similar revocation upon divorce statutes. It found most, as Florida’s is, are based on the Uniform Probate Code. Most jurisdictions applying the statutes find they apply to revoke the beneficiary designation, even if the statutes weren’t in effect when the insured and named beneficiary-spouse divorced.

E.g., In re Est. of DeWitt, 54 P.3d 849, 853 (Colo. 2002) (en banc) (an insured may preserve the designation of his a spouse as a beneficiary, by adding an express provision to the insurance contract or specifying in a marital settlement agreement, or getting a court order, that the statute doesn’t automatically revoke a spouse’s designation as beneficiary).

In Shaw, the policy designated an ex-wife as primary beneficiary and the decedent ex-husband’s three children as contingent beneficiaries.

The final judgment of dissolution of marriage was silent as to the life insurance policy. By then, the kids were adults. Several years after the divorce, Illinois enacted 750 ILCS 5/503(b-5). That statute revokes an ex-spouse’s status as beneficiary under a previously issued life insurance policy. The ex-husband died a year later.

The ex-wife claimed the policy proceeds, but the insurance company, following the revocation upon divorce statute, said no. She sued the company and three children. The insurance company moved for interpleader and was allowed to deposit the disputed life insurance proceeds into a bank until the court resolved the dispute between the ex-wife and contingent beneficiaries. The trial judge granted summary judgment in her favor. The appellate court affirms.

Prior to enacting the Illinois revocation statute regarding life insurance policies, Illinois law was an ex-spouse remained the beneficiary under a former spouse’s life insurance policy, even after entry of a final judgment of dissolution of marriage. On whether this revocation statute applied to beneficiary designations made before enactment, the ex-wife in Shaw cited analogous Illinois cases involving will provisions in favor of an ex-spouse. Those cases held the operative act (to determine if a revocation statute of will designations was retroactive) was entry of the final judgment of dissolution. She argued, if the final judgment came before enactment of the statute, the statute didn’t apply.

In opposition, one of the decedent’s three children cited, but the court distinguished, cases modeled after section 8-101(b)(5) of the Uniform Probate Code, including Meier v. Burnsed (South Carolina Court of Appeals, September 28, 2022). Those cases applied revocation statutes enacted after the date of the dissolution judgments to revoke life insurance beneficiary designations made before the dissolution judgments.

But the Uniform Probate Code, amended in 1990, specifically includes a provision revoking beneficiary designations to an ex-spouse upon entry of the dissolution judgment. When Sveen v. Melin was decided in 2018, 26 states had adopted statutes similar to this Uniform Probate Code provision. In contrast, the Illinois revocation statute at issue contained no such provision.

The court reviewed cases that found important that a beneficiary’s interest in a life insurance policy vests only when the insured dies. Still, interpreting the Illinois statute, the court found the operative act that triggers applying the statute was the date of the final judgment of dissolution of marriage, not the date the decedent died. Therefore, because the Illinois revocation statute regarding life insurance beneficiary designations wasn’t enacted until after the final judgment, it didn’t bar the ex-wife’s claim to the life insurance proceeds.

Two law review articles discuss the history and purpose of such statutes and treating life insurance designations the same as beneficiary designations under a will.  Lawrence W. Waggoner, The Multiple-Marriage Society and Spousal Rights Under the Revised Uniform Probate Code, 76 Iowa L. Rev. 223 (1991); John H. Langbein, The Nonprobate Revolution and the Future of the Law of Succession, 97 Harv. L. Rev. 1108 (1984).

Conclusion: automatic revocation upon divorce statutes may apply to revoke beneficiary designations under governing instruments, even if the divorce took place before enactment of the statutes. But courts in Uniform Probate Code states may reach different conclusions about retroactivity of such statutes when a decedent dies after their enactment. 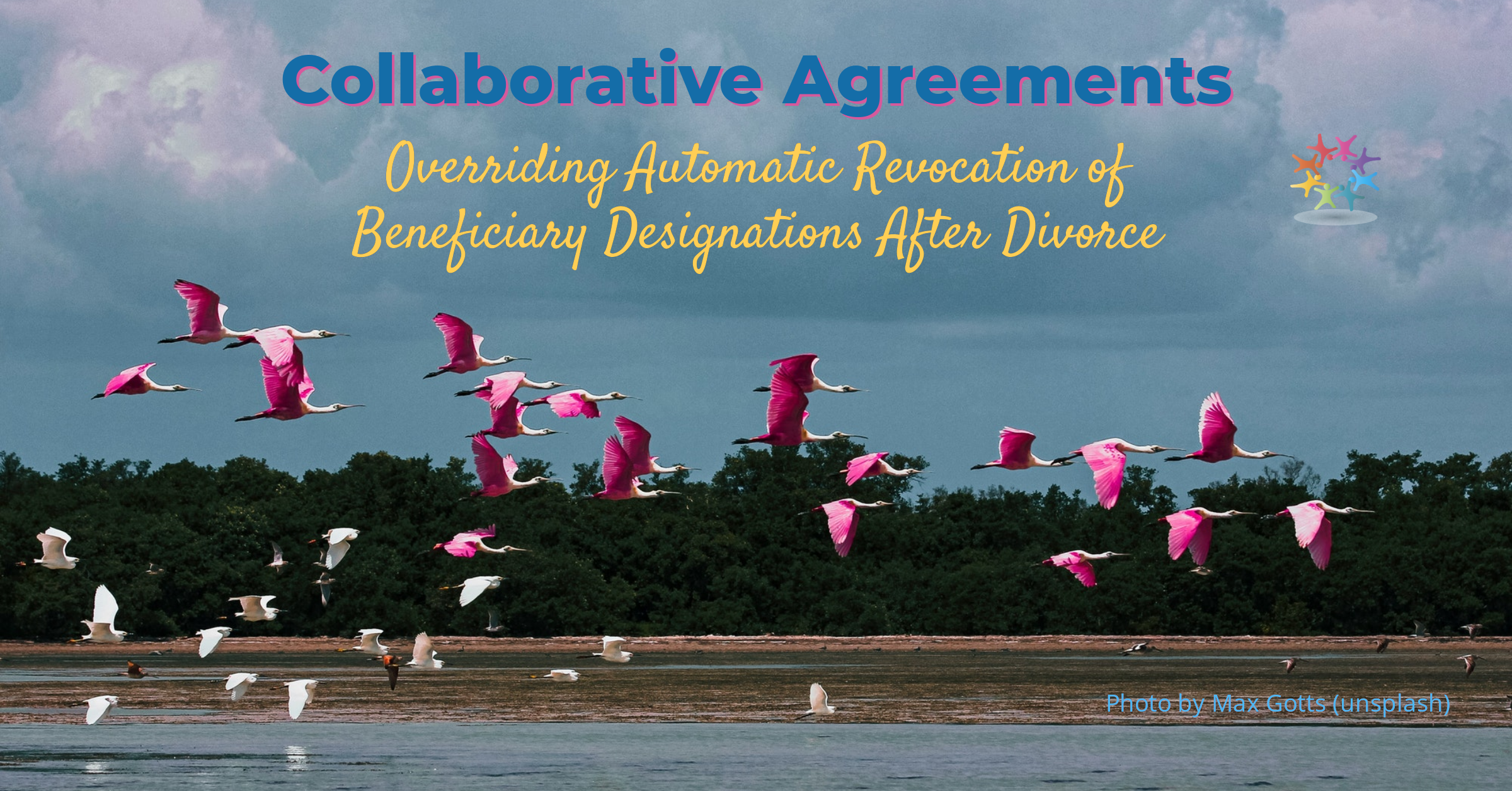 To illustrate the pitfalls, consider an Alaskan ex-wife’s experience.  She thought her divorce settlement agreement expressly awarded her a Transamerica life insurance annuity policy held at Merrill Lynch. But she learned Alaska’s revocation on divorce statute killed her complaint against Merrill Lynch, its employee, and her ex-husband’s girlfriend, whom he named beneficiary after the divorce and 3 days before he died.

The problem? The ex-wife’s divorce settlement agreement did not mention the Transamerica life insurance annuity. Instead, the agreement awarded her the value of “all retirement accounts which exist as of December 31, 2004.” The agreement specified profit sharing, IRA, 401(k), and Merrill Lynch accounts.  But the agreement failed to specify the annuity policy at issue, held in the Merrill Lynch account the parties agreed the ex-husband would keep.

Unfortunately for the ex-wife, the court rejected her contention that her ex-husband’s meant to keep her as the beneficiary and to avoid the revocation on divorce law. In support, she showed he kept her as the listed beneficiary for 13 years after the divorce and only removed her name when he was on his deathbed. See Snead v. Wright, 427 F. Supp. 3d 1133 (D. Alaska December 3, 2019). The court held the written beneficiary designation controlled.

Assuming things can be costly! So, to avoid costly assumptions, divorcing parties may want to override Florida’s (or other states’) automatic revocation of beneficiary designations under insurance policies. That means, before entry of a final judgment, a policyholder may commit to redesignating, after the divorce is final, a former spouse as beneficiary.  For example, the collaborative team may consider and discuss language here.