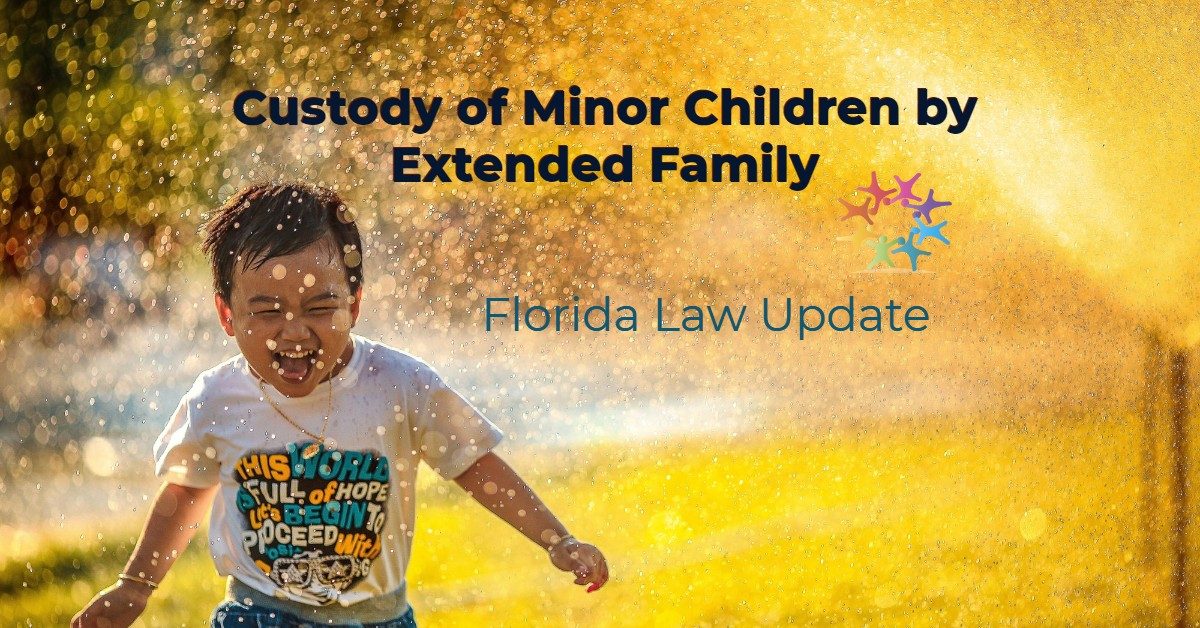 On June 16, 2020, the Florida Legislature passed and sent to the Governor a bill, CS/CS/SB 124: Custody of Minor Children by Extended Family.  If the Governor signs the bill into law, effective July 1, 2020, an “extended family member” may ask the court for “temporary” or “concurrent” custody of a child.  That’s not new. Under current Florida law, custody of a child indefinitely is “temporary” if the award excludes the parents, but is “concurrent” if the extended family member shares custody with the parents. 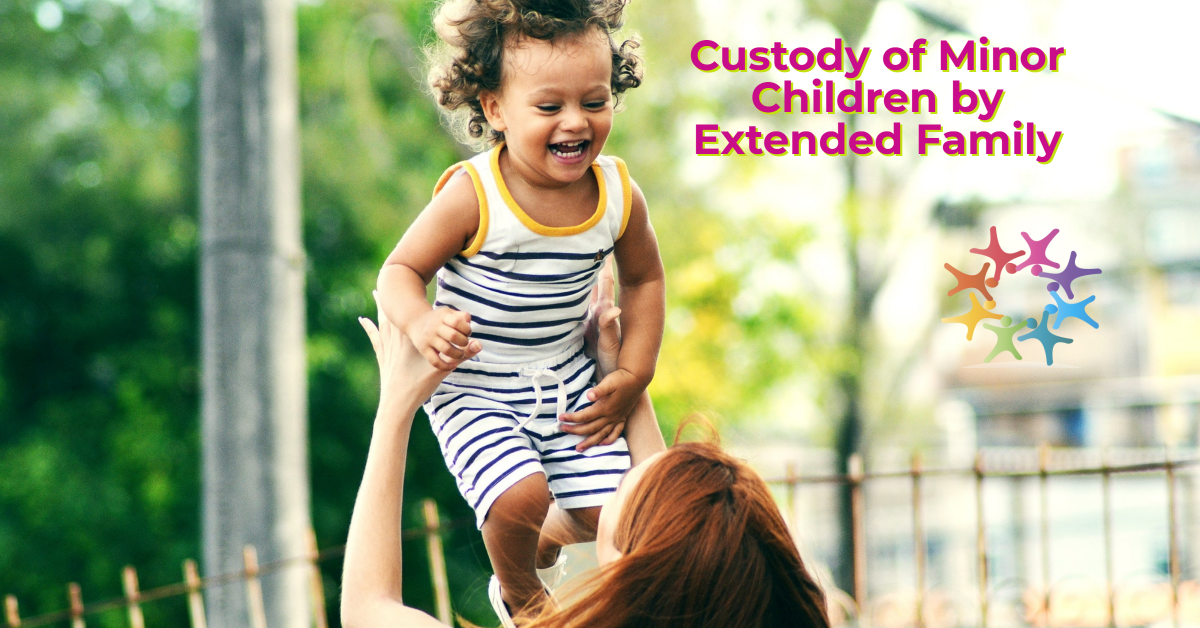 If enacted, the amended law will expand the judge’s power. Under the law effective July 1, 2020, the judge may keep a concurrent custody order in place after a parent objects, or a temporary custody order in place after the parents become fit. A court may maintain these orders beyond a parent’s objection or fitness to ensure compliance with a transition plan or other provision of the order “related to” the best interest of the child.

Under the amended Chapter 751, Florida Statutes, if the order granting temporary custody was entered after a finding that the child’s parent or parents are unfit and the child has been in the temporary custody of an extended family member for a period of time the court determines to be “significant,” the court, on its own motion, may establish “reasonable conditions” in the best interest of the child for transitioning the child back to the child’s parent or parents. In determining such reasonable conditions, the court must consider: 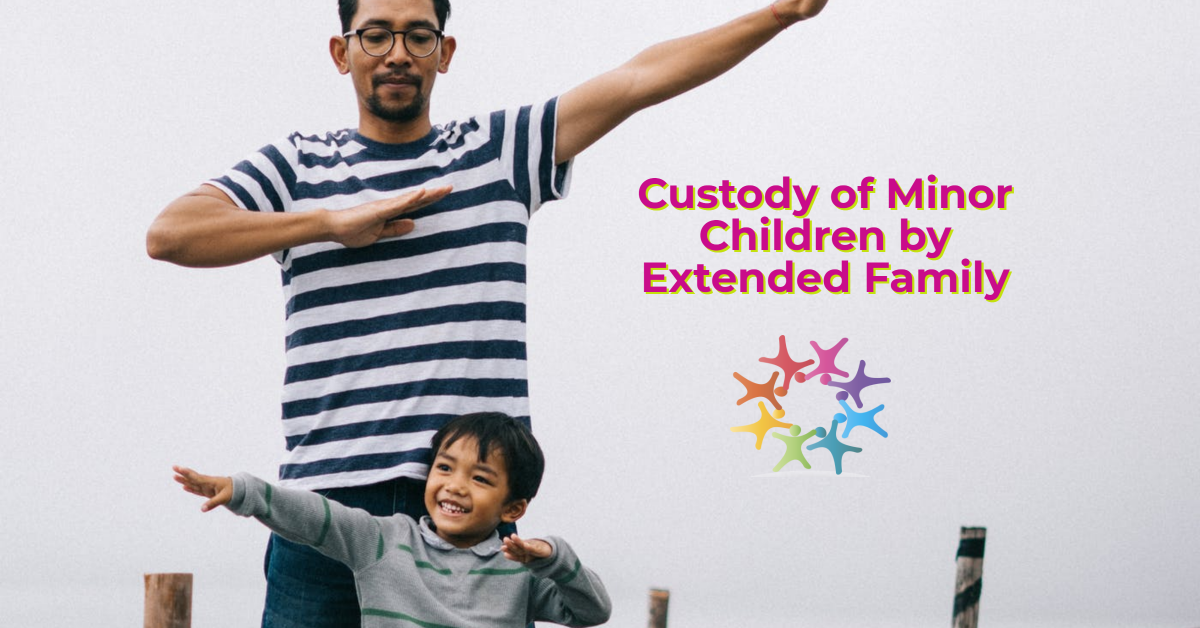 But what does “fictive kin” mean?  The proposed amended statute pulls in the definition from Florida’s dependency statute. “Fictive kin” means a person unrelated by birth, marriage, or adoption who has an emotionally significant relationship, which possesses the characteristics of a family relationship, to a child. Section 39.01(2), Florida Statutes.

A Google Scholar search (through June 18, 2020) of the phrase, “fictive kin” yields no reported appellate decision in Florida in which the phrase appears. As discussed later, multiple Florida cases have rejected nonparents’ claims that their significant emotional relationships to children entitle them to rights superior to parents’ privacy right to raise their children free from interference.

Parents in Florida have a fundamental constitutional right of privacy to make decisions about the care, custody, and control of their children, free from third party interference. The staff analysis of the bill now before the Governor cites Judge Logue’s concurring opinion in De Los Milagros Castellat v. Pereira, 225 So. 3d 368, 370-371 (Fla. 3d DCA 2017), summarizing this right:

In this regard, the Florida Supreme Court has held that “[n]either the legislature nor the courts may properly intervene in parental decisionmaking absent significant harm to the child threatened by or resulting from those decisions.” Von Eiff, 720 So.2d at 514. Under these principles, it is violation of a parent’s right to privacy for the legislature to confer on non-parents, even biological relatives such as grandparents, the right to visit minor children against the parents’ will. See Beagle v. Beagle, 678 So.2d 1271, 1277 (Fla. 1996) (holding that the State cannot impose grandparent visitation upon a minor child “without first demonstrating a harm to the child”).

Absent evidence of significant harm threatened to a child, parental privacy rights to make decisions for a child take precedence over the best interest of the child. To overcome this fundamental privacy right, the person asking to limit it must show significant harm to the child threatened by or resulting from the parent’s decisions. See generally Von Eiff v. Azicri, 720 So.2d 510, 514 (Fla. 1998).

“Florida law makes no provision for visitation between unrelated parties.” L.D. v. Fla. Dep’t of Children & Families, 24 So. 3d 754, 756 (Fla. 3d DCA 2009). That means, even when allowing visitation between a nonparent “psychological parent” and a child would be in the child’s best interest, courts can’t award child visitation against the will of a birth, biological, or legal parent. See De Los Milagros Castellat v. Pereira, 225 So. 3d 368, 370-71 (Fla. 3d DCA 2017) (Logue, J., concurring).  “[T]hose who claim parentage on some basis other than biology or legal status do not have the same rights, including the right to visitation, as the biological or legal parents.” Russell, 178 So. 3d at 59.

The Florida Second District Court of Appeal in Russell v. Pasik, 178 So. 3d 55, 59 (Fla. 2d DCA 2015), held a former same-sex partner of a biological mother had no standing to petition for timesharing with children conceived through artificial insemination and born to the biological mother.  The court  interpreted the Florida Supreme Court’s holding in D.M.T. v. T.M.H., 129 So.3d 320, 338-39 (Fla. 2013) to exclude someone not a biological or legal parent, but who has acted as a second or psychological parent, from establishing parental rights.

Cases decided after the Staff Analysis continue upholding parental privacy rights to raise children free from interference from third parties. It doesn’t matter that the third party might provide the child a better life than the parent could.  See, for example, Lane-Hepburn v. Hepburn, Case No. 2D18-4812 (Fla. 2d DCA January 31, 2020) (reversing award of timesharing to father figure who wasn’t child’s biological or adoptive parent).

And, in Kitchen v. Cerullo, Case Nos. 3D18-2016, 3D18-1605, 3D18-1603 (Fla. 3d DCA December 18, 2019) the court erred by granting temporary custody of child to maternal grandmother under Chapter 751, where there was insufficient evidence the dad was “unfit,” meaning clear and convincing evidence he abused, abandoned or neglected the child, as defined under the dependency statute, Chapter 39, Florida Statutes.

The Staff Analysis of the Florida Senate Judiciary Committee concludes: “Nonetheless, because child custody awards under ch. 751, F.S., often involve unfit parents, as well as the consent of or lack of objection to custody by a parent at the outset of the proceedings, the provisions of the bill may be distinguishable from the court opinions in which a fit parent objected to child custody at the outset of legal proceedings. Whether these differences are sufficient to survive a challenge based on the privacy rights of a fit parent is not clear.”

Proposed amended Section 751.05(4)(a), Florida Statutes, inserts an exception to a parent’s regaining physical custody of the child “at any time” after entry of a concurrent custody order. It reads: “except that the court may approve provisions requested in the petition which are related to the best interest of the child, including a reasonable transition plan that provides for a return of custody back to the child’s parent or parents.”

Likewise, amended Section 751.05(4)(b), Florida Statutes, states a temporary custody order, “may include provisions requested in the petition “related to the best interest of the child,” including a reasonable transition plan that provides for a return of custody back to the child’s parent or parents….”

Amended Section 751.05(6)(b) authorizes the court to require the parties to comply with provisions approved in an order granting temporary custody “which are related to a reasonable plan for transitioning custody before terminating the order.”

If the order granting temporary custody was entered after a finding that the child’s parent or parents are unfit and the child has been in the temporary custody of an extended family member for a period of time the court determines to be significant, the court may, on its own motion, establish reasonable conditions, which are in the best interests of the child, for transitioning the child back to the custody of the child’s parent or parents. In determining such reasonable conditions, the court shall consider all of the following:

1. The length of time the child lived or resided with the extended family member.

3. The length of time reasonably needed to complete the transition.

Proposed Section 751.05(7)(a) states a court doesn’t have to terminate a concurrent custody order when either or both parents object to it continuing, but may make them comply, “with provisions approved in the order which are related to a reasonable plan for transitioning custody before terminating the order.”

The above provisions insert a “best interest of the child” standard that would allow a judge to find it is in the child’s best interest to restrict restored parental rights following temporary custody or concurrent custody with an extended family member. These provisions make the proposed amended statute constitutionally vulnerable to attack.

If the Governor approves the bill amending Section 751.05, Florida Statutes, effective July 1, 2020, authorizing temporary or concurrent custody by an extended family member (expanded to include people unrelated the child biologically or by marriage or adoption, that is, “fictive kin”), parents claiming they’re aggrieved will challenge its constitutionality. The parents will say a judicial order imposing “reasonable” conditions under the amended statute conflicts with and must yield to their constitutional right of privacy to raise their child free from third party interference.  Parents will argue the amended statute wrongfully dilutes their constitutionally derived privacy rights. They will argue the amended statute circumvents and upends long-established Florida precedent striking the balance between privacy and the state’s interest in avoiding  significant threatened harm to children.