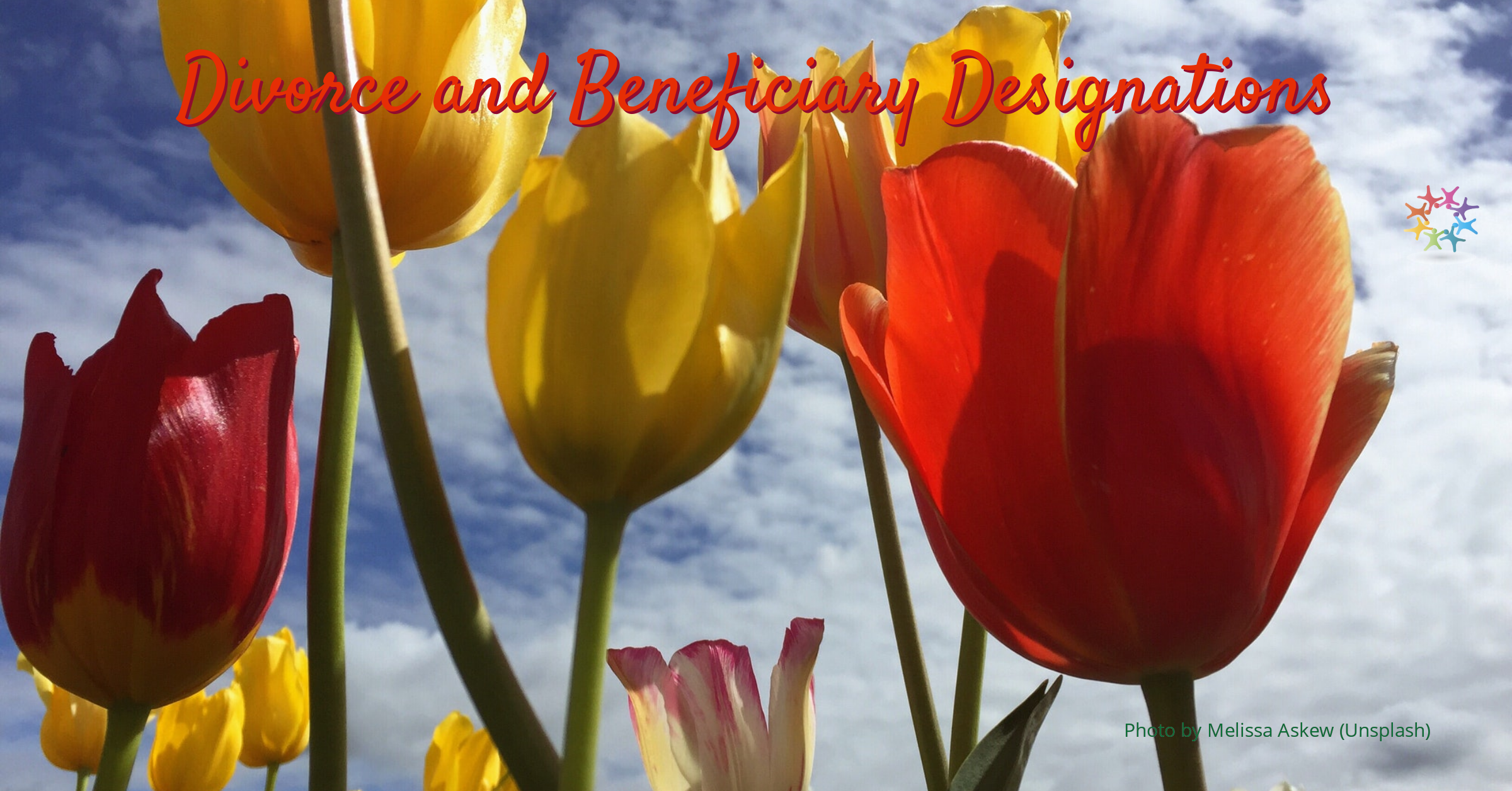 How does divorce affect your designations of an ex-spouse as beneficiary of assets when you die?  Multiple assets covered under Florida’s automatic revocation statute, Section 732.703, pass as if your surviving ex-spouse died first.

How it Plays Out: Life Insurance Beneficiary Designations

First Example: Single, Divorced, or Married to Someone Else.

The death certificate states the decedent was unmarried at death. It lists the marital status as “Single” or “Divorced” or “Married” (to someone other than the former spouse). Unless a statutory exceptions applies, Section 732.703(5) authorizes a payor to pay the secondary beneficiary.

Second Example: Insured Decedent Was Married to the Named Beneficiary

Florida law voided a provision of a will that affected a decedent’s spouse upon the dissolution or annulment of the marriage. If the person died without changing the will following divorce or annulment, the will was executed as though the former spouse predeceased the decedent.

The amended statute applies to decedents who die after July 1, 2012, regardless of when they made a beneficiary designation.

There are exceptions under the statute to automatic revocation of beneficiary designations of your ex-spouse.

On the other hand, when a spouse expressly waives rights to death benefits on an ex-spouse’s death, federal law hasn’t preempted state law claims by the ex-spouse’s estate or secondary beneficiaries.

For example, in Walsh v. Montes, 388 P. 3d 262 (NM Ct. App. November 14, 2016) the preemption doctrine did not bar claims between contestants to proceeds of a qualified Fidelity savings and investment plan under ERISA. The decedent designated her ex-husband on, but never updated, a beneficiary designation form. The plan administrator properly paid out the proceeds of the account in reliance on the form and by the plan’s written terms. The court found that the ex-husband had waived his rights in a marital settlement agreement to benefits in the ERISA plan, however. Thus, the court allowed his ex-wife’s estate and children to pursue recovery against him for the proceeds he received.

Likewise, courts have found no preemption to enforcing express waivers in marital settlement agreements. That means estates may recover funds administrators already paid out to an ex-spouse who waived entitlement to them. For example, in In re: Estate of Easterday, 171 A.3d 911 (Pa. Super. 2017), affirmed 209 A.3d 331 (Pa. 2019) the Easterdays signed a marital settlement agreement waiving their rights to each other’s pension benefits. The decedent had a pension plan through his employer, Federal Express. The pension plan administrator paid benefits to the former Mrs. Easterday. The court held ERISA did not preempt the estate from enforcing the contract she signed, waiving entitlement to those pension benefits. To the contrary, the estate could recover benefits already.

See also Estate of Benyo v. Breidenbach, 233 A.3d 774, 781 (Pa. 2020) (a statute providing that municipal employee pension funds were payable only to the designated beneficiary and not subject to garnishment or alienation applied “only to pension funds that remain in the possession of the plan administrator,” and didn’t prevent a court from directing the disposition of the funds after they left the pension administrator).

After divorce, as the policy or account owner, you may designate your former spouse as beneficiary. To do that, you sign a governing instrument providing the benefit will be payable to your ex.

When you divorce, you may contractually commit to continue beneficiary designations after divorce for your ex-spouse’s or children’s benefit. Indeed, in the Florida Supreme Court’s approved family law form marital settlement agreements, there is a section that guides divorcing couples through options to make or keep beneficiary designations. See In re Amendments to the Florida Supreme Court Approved Family Law Forms, 138 So. 3d 389 No. SC13-532 (May 1, 2014) and Florida Supreme Court Approved Family Law Form 12.902(f)(1), Marital Settlement Agreement for Dissolution of Marriage with Dependent or Minor Child(ren) (02/18).

If a will or trust covers the asset, you may specifically designate your ex-spouse as beneficiary of the asset when you die. Effective July 1, 2021,  section 732.507(2)(b), Florida Statutes permits a specific post-divorce designation of a former spouse in a will to designate an ex-spouse as irrevocable beneficiary of an asset. In 2021, the Florida Legislature amended section 732.507(2)(b), Florida Statutes. See changes at Laws of Florida, 2021-183.

Similarly, to maintain a trust asset for your ex-spouse’s benefit, effective July 1, 2021, section 736.1105, Florida Statutes doesn’t void statements in your revocable trust that refer to and specifically override automatic revocation. Nor does the amended statute void provisions of a revocable trust you may sign after your divorce committing you to designate your ex-spouse as beneficiary.

Exception 4: Final Judgment of Dissolution or Marriage Provides for No Revocation of Ex-Spouse as Beneficiary

When a final judgment of dissolution requires you to make or keep children of your marriage or your former spouse an irrevocable beneficiary of an asset, automatic revocation doesn’t apply.  A court may compel one spouse to maintain the asset for the benefit of a former spouse or children. Examples are death benefits earmarked to secure alimony or child support if you die before your support obligations end.

No automatic revocation applies when you can’t unilaterally change the beneficiary or pay-on-death designation for an asset.

When you can’t revoke a designation of your ex as beneficiary under applicable law, Florida’s automatic revocation statutes don’t apply.

Two or more persons own an asset. One owner’s death vests ownership in the surviving owner or owners. The automatic revocation upon divorce statute doesn’t change that result.

Exception 9: You Remarry Your Ex

You remarry your ex, whose interest would’ve been revoked. You’re still married to each another when you die. Automatic revocation under Section 732.703 doesn’t apply.

Questions to Determine If Section 732.703 Applies

Questions to Determine If An Exception Applies