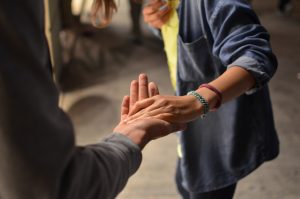 This is the final installment of a seven-part series by Michael P. Sampson.

But some couples have no intention of ever marrying.  “Domestic partnership agreements” or “no nups” are agreements between two unmarried people, regardless of same or opposite sex, which define property rights and support obligations if their relationship ends or one dies.

The support agreement provided that, in consideration for one woman giving up her job, selling her home, moving with the other woman, and maintaining and caring for her home, the other woman would provide all the support for both women, would make a will leaving her estate to the woman who gave up her job and would maintain bank accounts and other investments in the moving woman’s name. The agreement further provided for payment of a monthly sum upon termination of the parties’ relationship for various triggering events.

The court described the agreement as, “a nuptial agreement entered into by two parties that the state prohibits from marrying.” Even though Florida prohibited same-sex adoptions (but no longer does) and same-sex marriages (as of January 6, 2015, Florida’s ban was overturned), Florida still allowed agreements between unmarried people.

What are advantages and disadvantages of a legally binding marriage contract?
Domestic partnership agreements provide flexibility and certainty for couples not marrying but still binding their lives together.

Good estate planning and drafting contracts for property transfers and support can provide couples security, anticipate and plan for risks, save on taxes, allow for passing on assets to loved ones, enable charitable planning, and give guidance to personal representatives and trustees upon death.

Benefits of having a domestic partnership agreement include:

Disadvantages – if done improperly they can cause confusion and invite litigation. There may be disadvantages to the person giving up rights under Florida law in the absence of an agreement.

Collaborative Process – a team made up of a lawyer for each party, a neutral financial professional, and a neutral mental health professional may work with the parties in negotiating a domestic partnership agreement or, if the parties intend to marry, a premarital agreement. The parties may agree to submit any future disputes to an agreed-upon collaborative process, even using the same team as the one used during negotiations.

How can domestic partner agreements cover medical decisions? DNR, medical directives?
A married person can presumptively make critical health care decisions for his or her spouse when that spouse can’t, because of disability or incapacity. Unmarried partners cannot automatically make such decisions without special documentation.

Under current Florida law, absent an advanced directive or registration through a domestic partner registry, an unmarried partner generally has no rights to participate in decisions regarding the health, life, and death of his or her partner, and has no right to obtain or provide health care information in the event of an emergency or life-threatening condition. In the absence of written advanced directives to the contrary, only biological family may make life and death decisions if the person cannot.

An advance directive is a witnessed written document or oral statement by a person expressing their instructions about health care, through documents including, but not limited to, the: