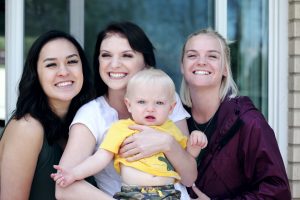 The trial court terminated the parent-child relationship between a mom (G.P.), and the parties’ child and voiding the adoption.  Because two unmarried women had filed an uncontested petition for adoption, the court held the circuit court never had subject matter jurisdiction to grant the adoption.

The Fifth District disagreed and reinstated the adoption and G.P.’s parental relationship with the child. The circuit court had subject matter jurisdiction. The biological mom (C.P.), couldn’t now challenge the adoption she helped procure.

“it would be unconscionable to allow C.P. to invoke the jurisdiction of the court for the sole purpose of creating a parent-child relationship between G.P. and D.P.P. and then to allow her to destroy that same relationship because her relationship with G.P. has ended.”

In IB, a child’s grandmother petitioned under the Florida Adoption Act to terminate her daughter’s parental rights and adopt the child. The child’s grandfather consented to the adoption, as did the biological mom.

Dad and the grandmother acted for 2 years as the child’s de facto co-parents. The child thrived under this arrangement. Had the adoption petition succeeded, they’d have been the child’s two legal parents.

Rejecting this attempt, the Fourth District held the dad – already a legal parent – couldn’t be a joint petitioner in an adoption of his own child, to avoid termination of his own parental rights and to add a second parent: the maternal grandmother.

Distinguishing D.P.P., the court in I.B. held the moms in D.P.P. were in a “committed” relationship at the time of the adoption. The child was born into a two-parent home where the parents were in a familial relationship with each other and the child. The I.B. court reasoned: “Sanctioning the adoption in D.P.P. was essentially sanctioning adoption by a stepparent because at the time, same-sex marriage was illegal in Florida.” The Legislature has clearly stated its preference that an adoption result in “adoptive parents” raising the adoptee as if the child were “born to such adoptive parents in lawful wedlock.” § 63.032(2). Id.

In 2020, the Florida Legislature passed a bill the Governor approved that expanded, effective July 1, 2020, the definition of an “extended family member” who may seek temporary custody of a child.

Read more about the amended law, parents’ privacy rights, “psychological parents” and the best interest of children in the blog Custody of Children by Extended Family Member.