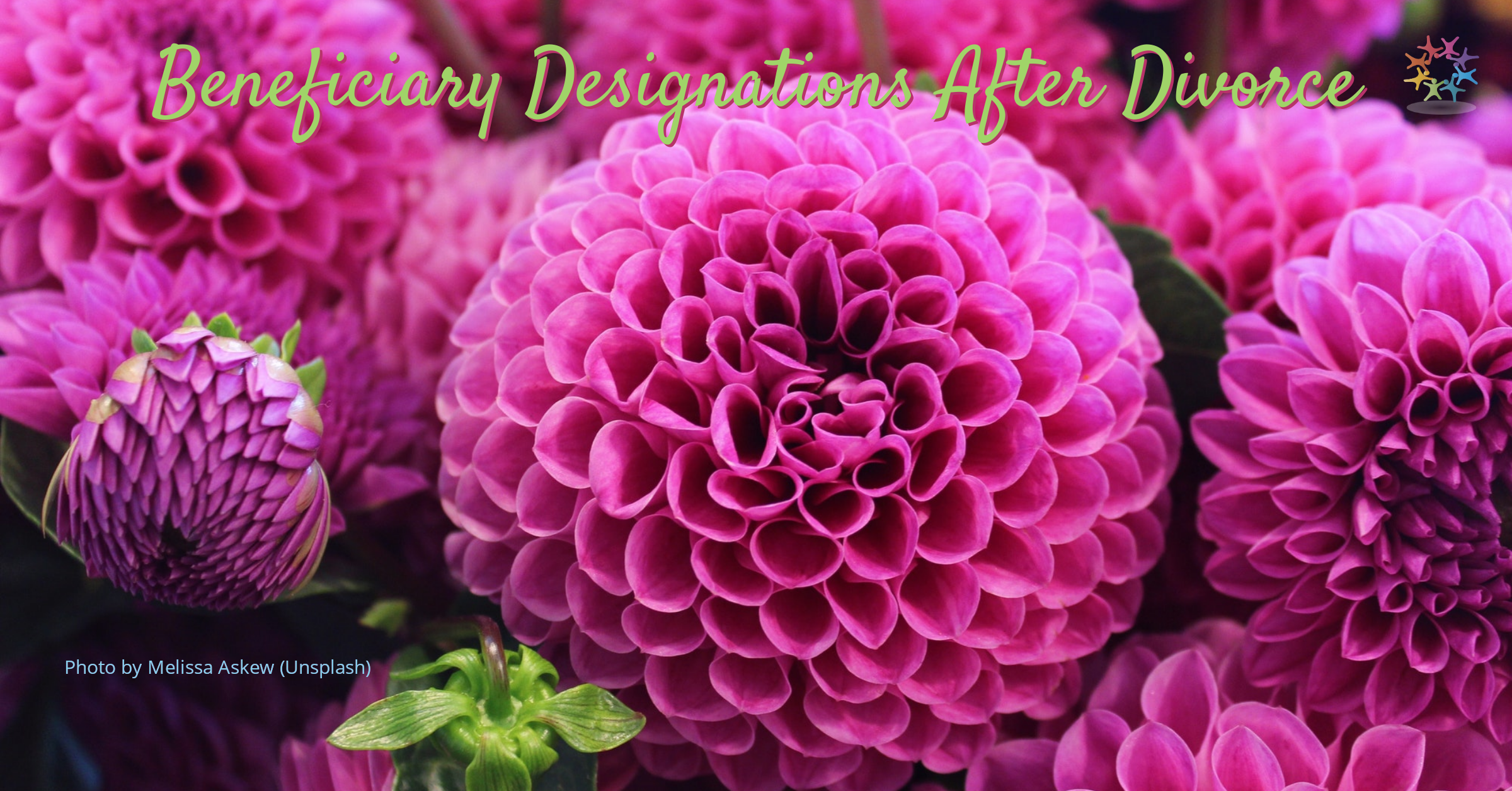 Will and Revocable Trust Provisions that “Affect” a Former Spouse

Will Provisions that Affect An Ex-Spouse Are Void on Divorce

With few exceptions, Florida law voids upon entry of a final judgment of dissolution, any will provision that “affects” a former spouse.

For provisions to “affect” an ex-spouse, they don’t need to benefit the former spouse directly. For example, in Carroll v. Israelson, the court held the statute invalidated will provisions establishing trusts for the decedent’s ex-wife’s relatives. Because such provisions “affected” her, they were invalid upon divorce. Read more here.

Assets covered under Section 732.703, Florida Statutes will pass as if the decedent’s ex died when they divorced. This statute may affect certain employee benefits. So, when an employer learns about the Florida employee’s divorce, the employer may consider notifying the employee about updating beneficiary designations.

How it Plays Out: Life Insurance Beneficiary Designations (Section 732.703)

First Example: Single, Divorced, or Married to Someone Else.

The death certificate states the decedent was unmarried at death. It lists the marital status as “Single” or “Divorced” or “Married” (to someone other than the former spouse). Unless a statutory exceptions applies, Section 732.703(5) authorizes a payor to pay the secondary beneficiary.

Second Example: Insured Decedent Was Married to the Named Beneficiary

Divorcing employees should update their designations in policies, trusts, and wills that “affect” their ex.  If they fail to do so, death benefits may go to someone whom the employee didn’t intend.

Section 732.703(2), Florida Statutes applies to decedents who die after July 1, 2012, regardless of when they made a beneficiary designation.

(a) A life insurance policy, qualified annuity, or other similar tax-deferred contract held within an employee benefit plan.

(b) An employee benefit plan.

(e) A security or other account registered in a transfer-on-death form.

(f) A life insurance policy, annuity, or other similar contract that is not held within an employee benefit plan or a tax-qualified retirement account.

There are exceptions to automatic revocation under Section 732.703, Florida Statutes of beneficiary designations.

On the other hand, when a spouse expressly waives rights to death benefits on an ex-spouse’s death, federal law hasn’t preempted state law claims by the ex-spouse’s estate or secondary beneficiaries.  That’s what the Florida Third District Court of Appeal found happened in Martinez-Olson v. Estate of Olson, Case No. 3D20-1301 (Fla. 3d DCA September 1, 2021).

In a marital settlement agreement, Mrs. Martinez-Olson specifically waived any entitlement to her TV producer decedent ex-husband’s 401(k). After they divorced, she still appeared as named primary beneficiary on the 401(k).  His employer, Sunbeam Television Corporation distributed the ERISA-governed 401(k) proceeds to her.

ERISA requires every employee benefit plan be established and maintained pursuant to a written instrument specifying how payments are made to and from the plan. 29 USC 1102(a)(1), (b)(4).  In Kennedy v. Plan Administrator for DuPont Savings & Investment Plan, 555 U.S. 285 (2009), the United States Supreme Court held  29 U.S.C. § 1104(a)(1)(D) requires an ERISA plan administrator to act “in accordance with the documents and instruments governing the plan . . . and ERISA provides no exemption from this duty when it comes time to pay benefits.”

The 3d DCA concluded Mr. Olson’s estate could pursue a post-distribution action against the ex-wife to enforce the marital settlement agreement and recover the proceeds. The settlement agreement was specific enough to override the beneficiary designation form.  It specifically referred to and the ex-wife waived any interest in the disputed 401(k) plan and the “proceeds therefrom.”

It’s unnecessary for divorcing parties to use magic words “death benefits” in expressing the waiver of interest in a specified 401(k) and its proceeds.

The court answered yes to the question of first impression: Could the estate bring the state law claim against the ex-wife as the named beneficiary to enforce a contractual waiver after distribution of the ERISA-governed 401(k) proceeds?

In support of its ruling, the Third DCA cited the Eleventh Circuit decision in MetLife Life and Annuity Company of Connecticut v. Akpele, 886 F. 3d 998 (11th Cir. 2018), which held, while a party not a named beneficiary can’t sue the plan for plan benefits, because ERISA preempts such claims, the party can sue the plan beneficiary to recover benefits received.

Likewise, in Walsh v. Montes, 388 P. 3d 262 (NM Ct. App. November 14, 2016) the preemption doctrine did not bar claims between contestants to proceeds of a qualified Fidelity savings and investment plan under ERISA. As in Olson, the decedent designated her ex-husband on, but never updated, a beneficiary designation form. The plan administrator properly paid out the proceeds of the account in reliance on the form and by the plan’s written terms. The court found that the ex-husband had waived his rights in a marital settlement agreement to benefits in the ERISA plan, however. Thus, the court allowed his ex-wife’s estate and children to pursue recovery against him for the proceeds he received.

Exception 2: After Dissolution, the Employee Redesignates the Ex-Spouse

After divorce, an employee may redesignate a former spouse as beneficiary.  The spouse does that by signing a governing instrument expressly providing the benefit will be payable to the ex.

Similarly, to maintain a trust asset for an employee’s ex-spouse’s benefit, effective July 1, 2021, section 736.1105, Florida Statutes doesn’t void statements in a revocable trust that refer to and specifically override automatic revocation. Nor does the amended statute void provisions of a revocable trust signed after divorce committing the employee to designate an ex-spouse as beneficiary.

Exception 4: Final Judgment of Dissolution or Marriage Provides for No Revocation of Ex-Spouse as Beneficiary

When a final judgment of dissolution requires the decedent to make or keep children of the marriage or a former spouse an irrevocable beneficiary of an asset, automatic revocation doesn’t apply.  A court may compel one spouse to maintain the asset for the benefit of a former spouse or children of the marriage. Examples are death benefits earmarked to secure alimony or child support if the employee dies before the employee’s support obligations end.

Exception 5: The Decedent Has No Ability Unilaterally To Change Beneficiary or Pay-On-Death Designation

No automatic revocation applies when the decedent couldn’t unilaterally change the beneficiary or pay-on-death designation for an asset.

When a decedent can’t revoke a designation of the former spouse as a beneficiary under applicable law, the automatic revocation statute doesn’t apply.

Two or more co-owners hold ownership of an asset.  One co-owner’s death vests ownership in the surviving co-owner or co-owners. The automatic revocation statute doesn’t change that result.

Exception 9: Ex-Spouses Remarry Each Other

The decedent remarries the ex-spouse whose interest would have been revoked. They’re still married to one another when the employee dies. Automatic revocation under Section 732.703 doesn’t apply.